Koskenkorva - Sustainable vodka from the village

In the village of Koskenkorva, life isn’t complicated. We have good barley, pure water, dedicated local farmers and state-of-the-art distillation process. We work with nature’s best ingredients to create a smooth, sustainable vodka. It’s as simple as that.

In the village of Koskenkorva, sustainability is a way of life. First of all, it’s worth mentioning that the recycling and reutilization rate of the Koskenkorva plant is 99,9%. However, that is not the only thing we are focusing on. All in all, Koskenkorva works in a sustainable manner but has a special focus on what is called circular economy.

In addition to grain spirit, the Koskenkorva plant produces starch and raw material for animal feed. Even the carbon dioxide generated in the fermentation process is collected and used in greenhouse cultivation. Koskenkorva also has its own bioenergy power plant. It uses barley husk as fuel and produces steam that is then used in distillation. The ashes are used in the nearby barley fields as a fertilizer. And thanks to the renewable fuel, Koskenkorva has been able to decrease its carbon dioxide emissions remarkably.

For this sustainability work Anora and our distillery, the Koskenkorva plant, were awarded the Green Company of the Year award in the 2018 Drinks Business Green Awards.

Distilled from the northernmost barley in the world

Koskenkorva is made of the northernmost barley in the world. Barley provides the best harvest in the arctic climate of the village. The summer days are so long that for almost a month the sun doesn’t set at all and all that abundant light enhances the enzymatic properties of the barley. Most of Koskenkorva’s barley is sourced locally within a 200 km radius of the Koskenkorva village.

We use pure Finnish spring water

The water in Finland is known of its exceptional quality. One of the main reasons our vodka tastes so smooth is the 100% unfiltered and unprocessed pure spring water from Rajamäki.

Water from rain and melting snow flows through the ridges of Salpausselkä and its sandy soil cleans the water naturally. The effect of the ground and the lack of chemical treatment give the water a fresh taste and clear color. To keep the exceptional water quality, Anora protects the water abstraction areas by owning land, limiting construction and establishing environmental protection in the area.

Pasi, Matti, Jaakko and Maija are among the almost 1500 farmers contributing to the making of Koskenkorva vodka. In the village of Koskenkorva, the craft of cultivating barley has been passed on from generation to generation. Anora encourages the local farmers to maximize the efficiency of farming, to use nutrients sensibly and to monitor the barley during the growth season to ensure its viability.

What about flammable shots? You've all seen those but perhaps wondered how it works and foremost, how it changes the drink. Setting alcohol on fire might have many purposes. Note! It can also be very dangerous so always take needed precautions.
Cocktail ABC
Black shots
Vodka

Our staff member Milja loves to hike in Finnish Lapland. One of her favourite seasons to visit Lapland is the end of October - when the first snow falls. Nature is silent, fauna and flora are waiting for the winter.
Nordic Nature 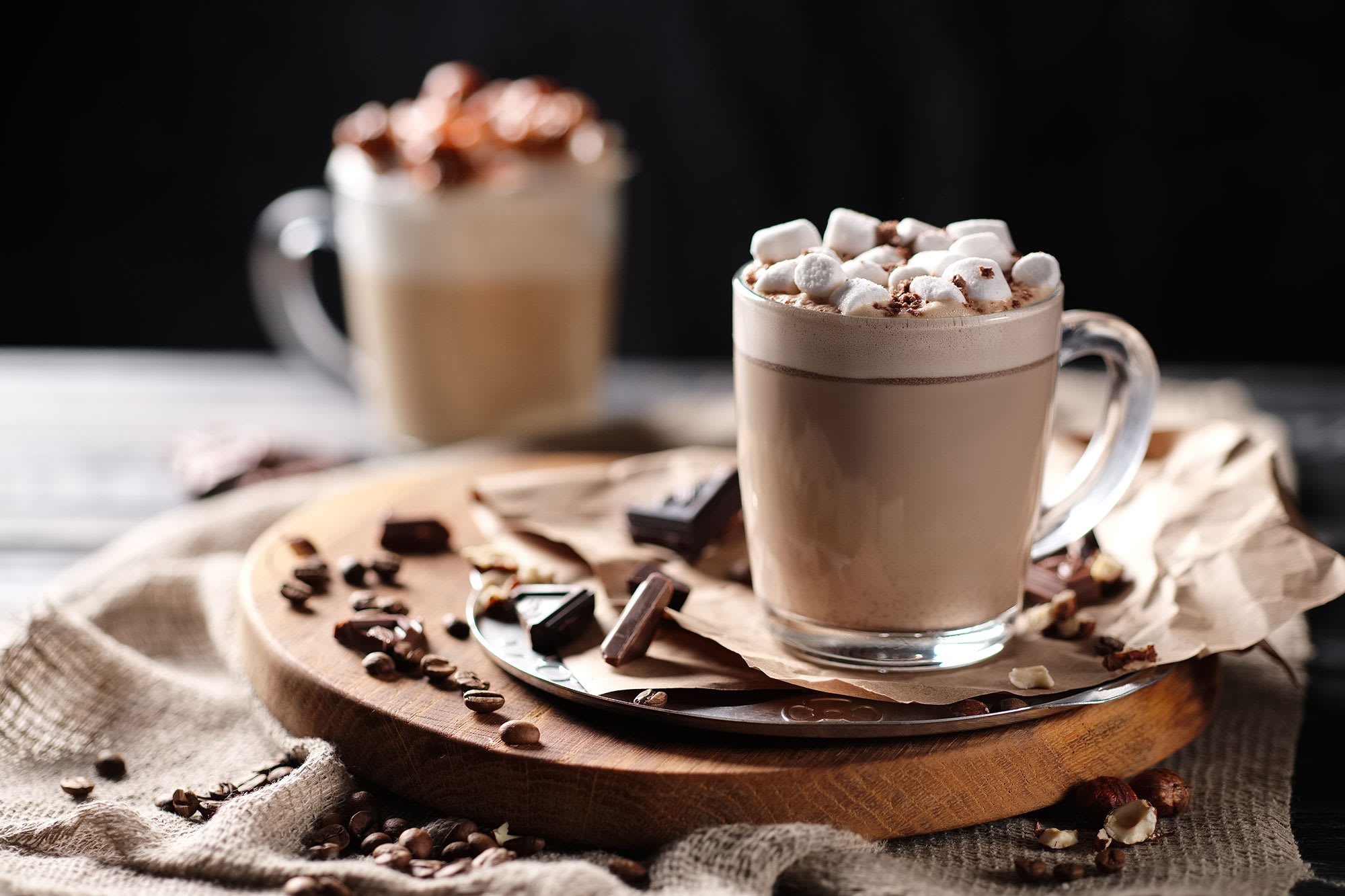 Searching for the perfect after ski drink

Forest berries, such as blueberry, raspberry, lingonberry, cranberry are a great source of taste & freshness. Here is a list of products where we have used berries from the forest. Made in Finland, of course.
Forest berries
Nordic Drinks
Gift ideas
Summer Celebration

How is Koskenkorva Vodka made?

Koskenkorva Vodka is distilled at Koskenkorva village in Finnish Ostrobottnia. Our operations are sustainable, we use barley that comes from within 200 kilometer radius and pure Finnish spring water.
Cocktail ABC
Sustainability

World's first foraged vodka is made by Koskenkorva

Koskenkorva Foraged Vodka is a new, unique premium vodka that takes the consumer back to the nature and combines today’s trends of food foraging and local craftsmanship.
Nordic Drinks
Forest berries

Koskenkorva distillery is powered by a self sufficient bioenergy plant

The ethanol distillation process requires a significant amount of steam, and more than 95 percent of the climate impacts of alcohol production are generated during the distillation of ethanol.
Sustainability

Salty liquorice – salmiakki in Finnish - is a unique candy which is known only to approximately 1 % of the world’s population. It is an intriguing combination of sweet and salty taste.
Black shots
Liquorice
Nordic Drinks
History

Koskenkorva has received several awards in prominent international spirits competitions during the spring and summer of 2020.

What a zero waste bar – or a bar which generates almost no waste at all – looks like?

Zero waste, sustainable development, carbon footprints, and climate change have us all talking. But what does zero waste translate into in practice in the job of a bartender? Koskenkorva Vodka Global Brand Ambassador Mikael Karttunen explains.
Cocktail ABC
Sustainability

Altia, the producer of Koskenkorva Vodka, aims to make its production carbon-neutral by 2025.
Sustainability

Coffee is an essential part of Nordic drinking culture

One can’t really talk about Nordic drinking culture without mentioning coffee. The locals are some of the biggest coffee drinkers in the world: Finns consume 12 kilograms worth of coffee beans annually per person.
Coffee

What is the difference between a shot and schnapps?

Shot, schnapps... as we say in Finland: a beloved child has many names! But is there indeed a difference in them? And how cold they should be? How fast a shot bottle can be chilled? Altia's Brand Ambassador Mikael Karttunen answers the tricky questions.
Cocktail ABC

In the Nordics, midsummer has long been considered a magical time of love.
Nordic Culture
Midsummer

Vodka that fights the the climate change: Koskenkorva Vodka Climate Action is the first vodka in the world made entirely from regeneratively farmed barley.
Sustainability
Vodka

The secret of Nordic midsummer

Midnight fires. Dances around maypoles. Fresh potatoes and fish. Saunas and lakes. Empty cities, abandoned by people who are looking for a few days break to enjoy the endless daylight - in a very similar way than the previous generations have done.
Nordic Culture
Midsummer
Aquavit

Mixing of different shot liqueurs can be fun and rewarding - but you might also face a hiccup. Learn the safe bets for combining shots.
Black shots
Cocktail ABC
Liquorice
Nordic Drinks

The coldest winter season is approaching - read on to find out what are the best Nordic Winter Drinks!
Hot cocktail
Nordic Drinks
After-ski

Summer parties are at their best when held at a summer cottage or in the countryside, but you can also create an unforgettable atmosphere in your own back garden.
Nordic Culture
Summer Celebration 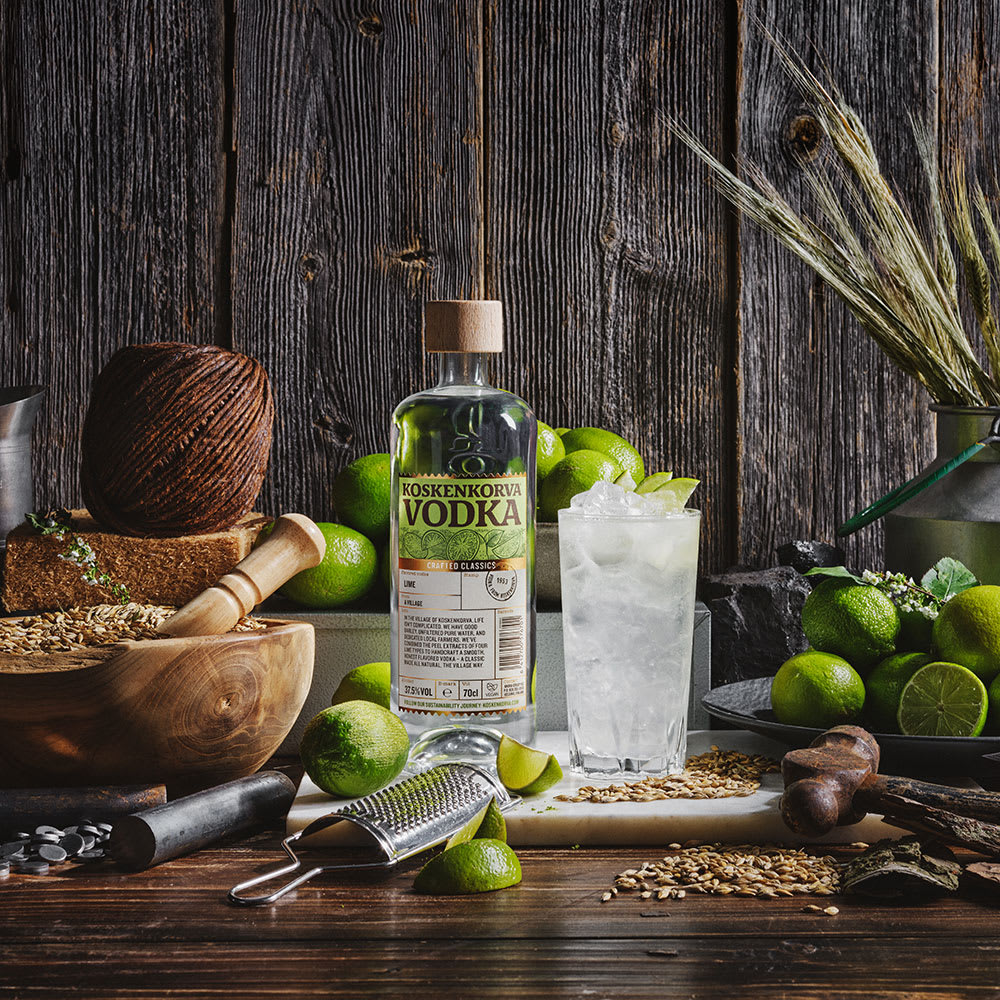 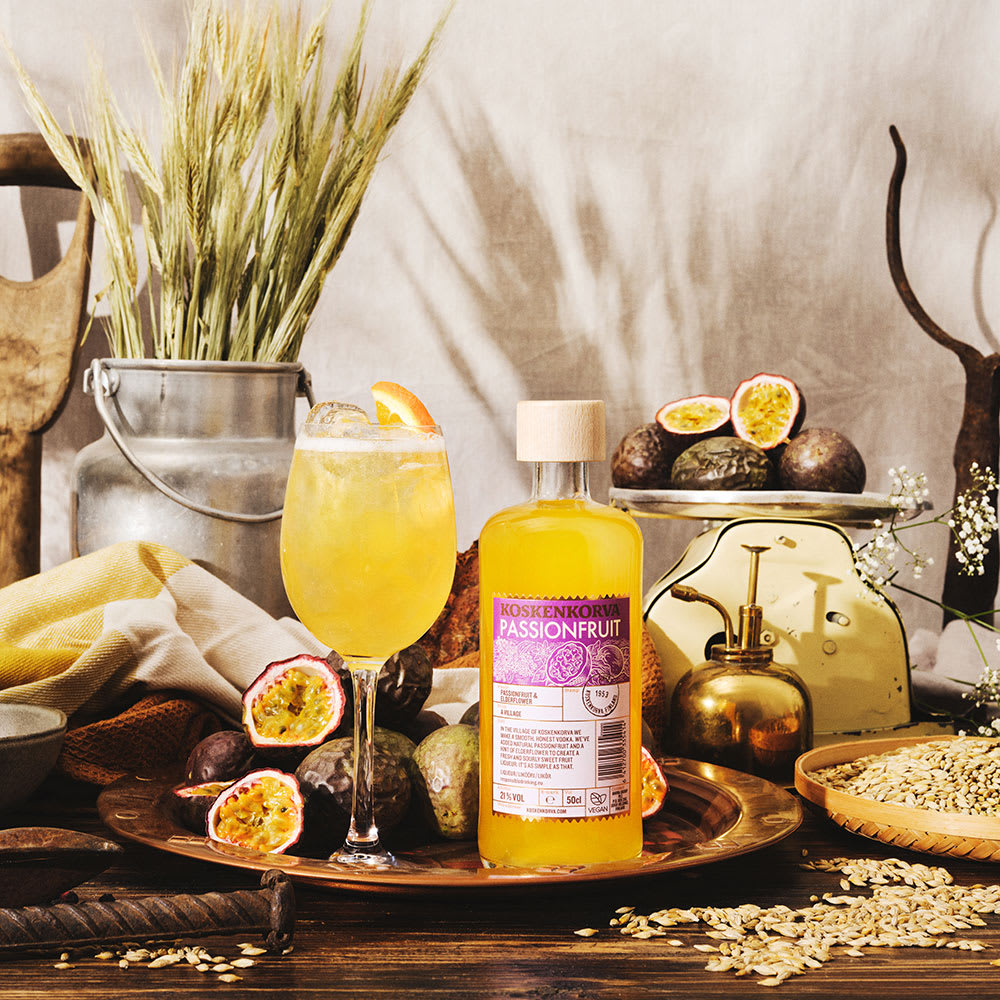 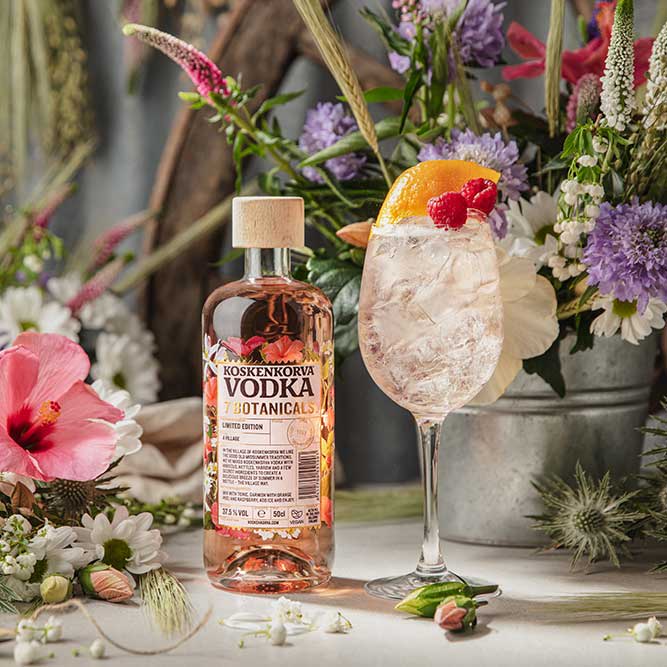 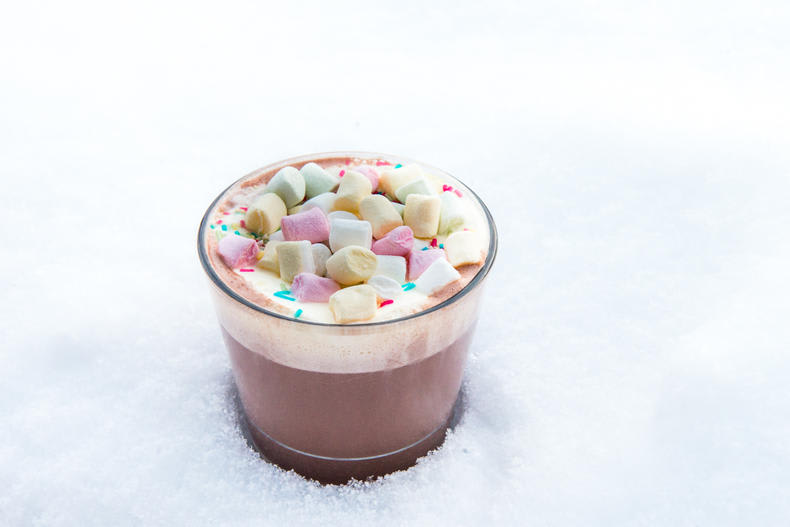 If Santa Claus had an official cocktail, it would be this. Hot chocolate with Koskenkorva Minttu & marshmallows.
After-ski
Easy cocktails
Hot cocktail

Fresh and delicious, this vodka cocktail blended with the one and only Koskenkorva Vodka is perfect for a sunny day.
Forest berries
Medium

Even classics such as the Manhattan get a village twist by adding two favorite things of any sauna enthusiast - the smoke and the steam of a smoke sauna. The layers of this drink chase each other just like the steam that chases the smoke out of a sauna
Medium
Classic twists
Vodka

A carrot and vodka cocktail with hints of orange and lemon.
Medium
Celebrations
Vodka

A fresh Cocktail that's worth a shot of Koskenkorva Lemon.
Vodka
Medium

A pepperminty surprise for the fans of candy cane.
Medium
Glögg
Celebrations
Christmas

A delicious vodka cocktail with a taste of lemon & lime, some orange and fresh basil.
Vodka

A sour style cocktail with vodka and sherry.

A cocktail made of Koskenkorva Ginger Liqueur and Ginger Ale with real ginger flavor.
Ginger

Shaken, not stirred. This is a signature cocktail of Koskenkorva Vodka.
Medium

A village twist of a classic Clover Club cocktail with raspberries.
Medium

Vodka & Soda was the first cocktail made with Koskenkorva Vodka when it first arrived in 1953.
Easy cocktails
Classic twists
Summer Celebration
Vodka

Beet juice has many health benefits and because this drink is prepared in a shaker, it's a fitness drink.
Medium

Every youngster in the village has felt the rush of adrenaline stirred up by a foray into the neighbors' yards filled with apple trees. This drink is inspired by the forbidden fruit and named after the adrenaline junkie.
Easy cocktails 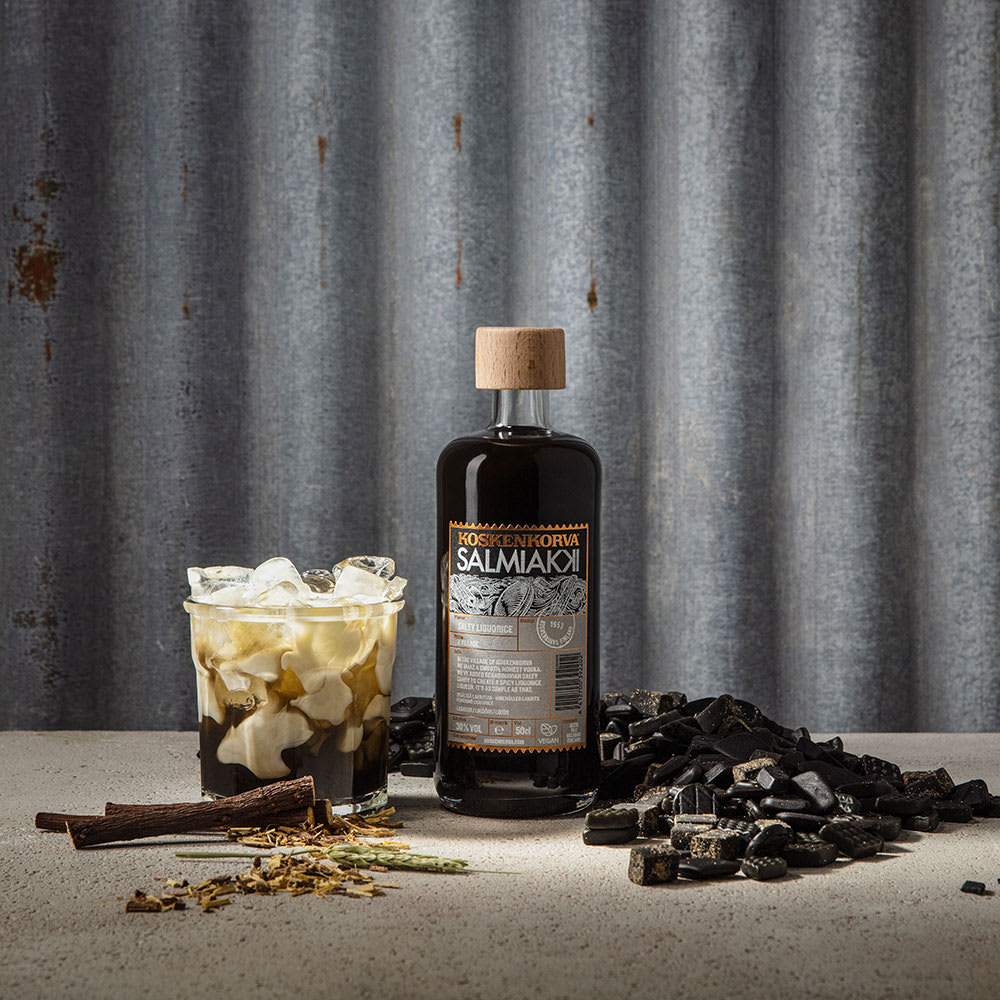 This fresh cocktail from Koskenkorva has raspberry flavour as the base, with a twist of lemon & ginger.
Medium

An easy drink combines the freshness of cranberries and vodka.
Easy cocktails

Finns like to keep things and their cocktails simple and straightforward. This drink is called Kossuvissy" in Finnish."
Easy cocktails 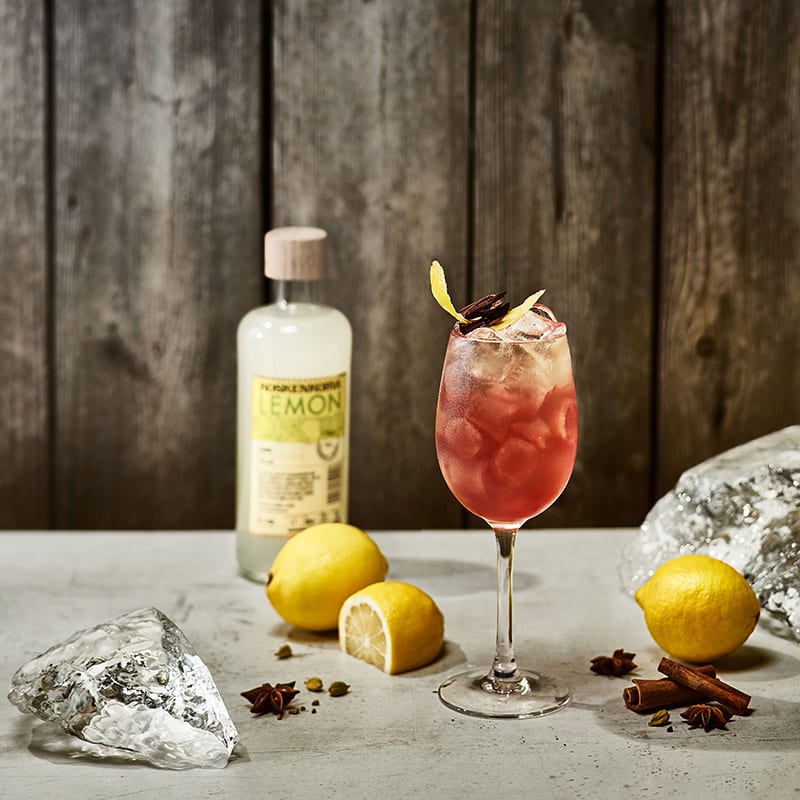 A new variant of the popular drink - now with flavors of lemon, mulled wine and cinnamon. When topped with sparkling wine, it becomes festive.
Christmas
Easy cocktails
Glögg
Celebrations